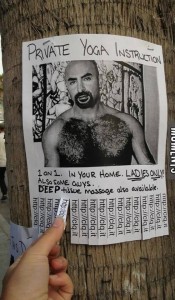 Unless you’ve been living under a rock, you’ve heard about a number of sex scandals over the past few years involving male teachers sleeping with, sexually assaulting, and raping their students.

As a male yoga teacher and believer in human equality, these instances not only trouble me, but also evoke compassion for the victims, bring shame and distrust onto our entire community, especially my fellow male teachers.

This week an up and coming male celebri-yogi very publicly tried to make the case for why it’s okay to sleep with your students. He engaged in mental gymnastics—concluding with arguments like “what’s the big deal anyway?”  “its not a corruption of ethics” and “the guru is dead”—to justify seeing his students as potential bed partners. The sheer amount of effort he is putting in to justifying his behavior tells us that on some level even he knows that it’s wrong.  And no, I’m not calling him a predator but this reminds me of the need for our community to address setting healthy boundaries in the student-teacher relationship – especially when it comes to sex.

When a 22 year old teacher trainee is told by her 40 year old teacher that she is pretty or special, and he uses his position of power to lure her into a sexual encounter, it’s exploitation. When she is afraid she’ll lose the $5-10,000 she paid for the training and never become a teacher, all for rebuffing his advances—she is a victim being exploited. Let’s never let a student or teacher trainee feel like he/she must drop their own sexual boundaries for fear of not passing a training program.

Too many male teachers do not understand the subtleties of the power dynamic with their female students. While sex between consenting adults is perfectly fine, in order to have that both adults must be equals, and no imbalance of power can exist between the two. If there is an imbalance of power between the two, if one has disproportionate authority over the other (or any authority over the other), consent cannot be given. Of course, exceptions exist where power dynamics are eliminated, and student and teacher become equals.

Any yoga teacher, male or female, who sees their students as anything other than souls to be protected, guided, and loved (not in a sexual way), needs to stop teaching, immediately.

Plus, a big part of yoga involves opening up and surrendering to the practice so it can transform you—making yourself even more vulnerable in the process and trusting a teacher to guide you. This is why it’s wrong for a teacher to sleep with their students—it’s a violation of this sacred trust. In this relationship, the teacher and student are not equal because the relationship requires one to be vulnerable and one to safely guide the other.

At the same time, predators are naturally attracted to such vulnerable souls. So, the sacred duty of protecting, nourishing and supporting this transformational vulnerability depends on students and teachers alike.

Being a male yoga teacher these days means that every time another fake “guru” is outed for sleeping with his students or for lecherous acts, it reflects on you—no matter how strong and professional your boundaries are.

Being a male teacher also means that it only takes one accusation, rumor, or bit of innuendo to wreck your reputation and end it all for you. So, you’re very careful with adjustments and assists and maintaining strong and clear boundaries.

Like so many other yoga teachers, I have always maintained the strictest boundaries with students and resisted advances from them.

Too often, students attribute their post class bliss to their teacher, and assume that if asana was that good sex would be even better. They confuse the practice with the teacher. This leaves them vulnerable, and easy prey for the predator.

A teacher with poor ethical boundaries, low self esteem, or with predatory tendencies (or all three) may be tempted to take them up on their offer, but the damage to the student-teacher relationship that follows usually leaves the student wounded and confused while the teacher moves on to hook up with another student.  Its a story we’ve all heard many times and its done by male and female teachers alike.

And its not just the teachers—we’ve all seen more than a few students aggressively pursue their fellow students before and after class. Sorry guys, but a studio is not the place for that.

I recall hearing about a studio where I used to live in New Mexico where it was well known that a male student was working his way through sleeping with many of the female students in the classes he attended.  So what did they do?  They enrolled him in their teacher training program…and he is probably now doing the same thing with his students – to the detriment of the studio’s community.

In the end, it’s about remembering that its about the teachings, not the teacher. Being a yoga teacher is a sacred honor to humbly pass along the teachings which were revealed to sages in ancient times, all while honoring the integrity not only of the practice, but of our lineage.

The celebri-yogi I mentioned above has now put the world on notice that if you sign up for one of his trainings and he takes a shine to you, you may be sized up as a potential bed partner and maybe even expect an advance to be made. While I truly doubt this was his intent in making his statement on sleeping with students, this perception will be hard to shake…not only for him but for every male yoga teacher out there.

This is a call to action for all teachers and practitioners to support strong ethical boundaries which protect the practice. You don’t sleep with your students nor do you flirt with them. When you see something wrong happening, you call it out.  We’re all responsible for maintaining healthy boundaries in our communities.

Its time for us to create, support, and protect a safe environment for students to allow themselves to be vulnerable and allow the practice to transform them—all without any fear of sexual advances or assault—creating conditions which do not allow sexual predators to move in our midst, especially not as teachers.