Tits & Ass In A Mala: Yoga In The Media ~ Maya Devi Georg 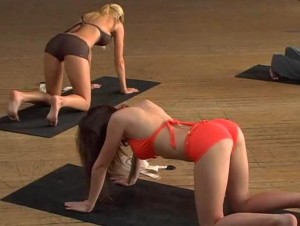 I’m getting really tired of seeing half-naked (or completely naked) women in yoga magazines and on yoga web sites.

The images themselves are of young white women. They are depicted in the nude, topless, or in underwear. Their lips are pouting, their eyes are empty. They may be in an asana that requires strength and flexibility, but the expression on their face is often soft, blank, and pleading. Sometimes, they are just draped within the image, eyes closed.

I’ve seen young woman, intelligent and highly educated in the ubiquitous uniform of panties, tube top, and mala. There are others that gained fame and notoriety out of being the featured model for various ad campaigns. In these campaigns the women were photographed in the nude, they were not the subject of the image, but merely the prop or background for the featured item.

Years ago, as a new teacher I remember thinking “I’ll make it as a yoga teacher with my clothes on!” Granted, I was much younger then, and certainly less evolved. But I immediately dismissed those women, thinking they could not be taken seriously or have anything other than their appearance to offer. In my eyes, they lost all credibility, and were merely reduced to their parts.

Of course, women are always being reduced to parts. In 2012 the European Journal of Social Psychology published a study that found, while men are seen as whole individuals, women were seen as parts,  arms and legs, breasts and buttocks. This is done by men and women, alike—and it is disturbing.

Some women claim this is asserting their sexuality and therefore empowering, I feel they’ve taken the kool-aid. Owning one’s sexuality and experiencing it both freely and responsibly is indeed empowering. Wearing next to nothing and pouting in pigeon pose to shill the latest yoga accessory is exploitation. It is exploitation because using these images of barely or completely undressed young women steals their humanity, and reduces them to body parts.

My argument is not against female sexuality, or the female body. My argument is against the media, and a common marketing tool that demeans women rather than empowers them. I am not saying we should wear burkas. Nor am I saying we should feel shame for our bodies. I am saying we need to stop allowing young women to be exploited so someone else can make a buck.

I’m objecting to yoga, a spiritual practice, turning into a shallow parade of T&A.

The feminist perspective on this should be one of abhorrence. The patriarchy has exploited feminism and won. He has deluded women into believing they are empowered, but they are really being used, turned into sex objects and exploited to satisfy men’s pleasure.

When you sexualize the sacred and reduce someone to nothing but a body, you’re removing the sacred and placing someone in a very narrow box which has nothing to do with yoking body, mind, and soul.  It demeans both women and the practice itself.

Women are being convinced (or convincing themselves) that turning themselves into a piece of meat is necessary in order to succeed, but at what cost to our soul?

Yoga is still marketed mainly to women, so why do we allow this? Why do we continue to support this with our hard-earned cash? What happened to the desire for women to be taken seriously for their intellect and their actions? We aren’t powerless. As consumers we can take a stance with how we spend our money. As a community we can talk about it.

A lot of people do yoga. Not just hot, young, white women. Let’s start reflecting that in our media! How about featuring non-sexualized images of young women, or celebrating images of older women, women of color, or men at any age?

Using sexuality to get ahead means sacrificing something else… something at the very core of our essence. How about relying on our skills, talents, and voices? When we present ourselves in a sexual manner it robs us of our voice. Without our voice we are no different than an earthen pot; hollow and waiting to be filled. 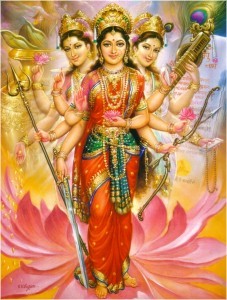 A big part of yoga is drawing on the feminine energy, awakening the kundalini, manifesting love, and embracing shakti. By presenting yoga and yoginis in sexualized ways we are taking the central divine aspect of the spiritual practice and dismembering it, reducing it to arms and legs, tits and ass. This destroys the power of the practice. This profanes the sacred, turning it into pornography.

Parvati, Lakshmi and Saraswati represent the aspects of womanhood: power and strength, beauty and abundance, intelligence and creativity. These goddesses are not depicted in bikinis, nor are they seen as wilting flowers. It is only through their grace that the gods, and this world, exists.

Let us celebrate our minds, our capacity for love, and our strength as women! Because our strength does not lie between our legs, it lies within our hearts.