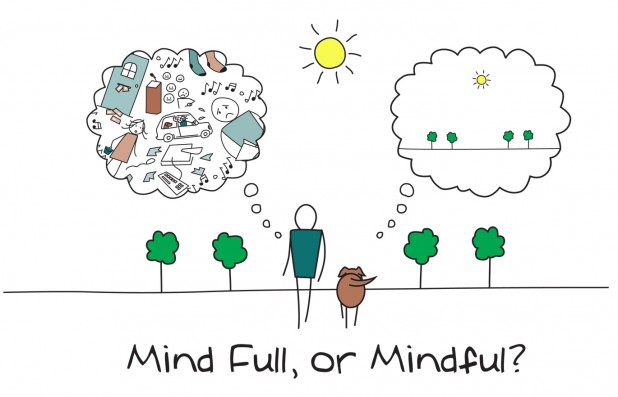 I’ve been meaning to write about Attention Deficit Disorder (ADD) for quite awhile but it often gets lost in the middle of 7-8 other pieces I have in the works.

Okay, that was a joke and if you have ADD, or love someone with ADD, you got it.

As many as five percent of American children are diagnosed with ADD, with many of them being prescribed drugs like Ritalin and Adderall—with the full support of their concerned parents who are frightened that their child will fail at school, and life as well.

While ADD has been classified as a learning disorder, I’m here to tell you that it’s the farthest thing from being a disorder; it’s a gift. And learning how to cultivate and unpack that gift is possible through yoga.

Its not easy growing up with ADD and its not easy to be the parent of a child who has it.  The schools, children’s activities, and the entire social order around you seem foreign and you aren’t quite sure how you can fit in. You’re called names like Spaz, Freak, and Weirdo and sometimes you believe them. Frustrated parents argue over how to “handle” you and teachers think you are a troublemaker (and sometimes they’re right)!

In my case, all of the above was true. Growing up in a big boisterous family of nine (plus three dogs) meant living in the middle of chaos—not exactly the best environment for a kid with ADD.

In the second grade, I was convinced by my teachers that I was stupid until my parents sent me to a battery of IQ tests where I scored at the genius level. Nonetheless, my grades in school did not reflect this.

Before we delve in too deeply, I think its important to understand that this gift has been given a name that is all wrong. Its not a deficit of attention but rather, an abundance of it.   A better name would be AAG, Attention Abundance Gift, but for now we’ll stick with the more commonly used term.

Imagine trying to pay attention to every single thing your sensory inputs are telling you simultaneously—for every day of your life. Or how about having to learn how to read while simultaneously trying to memorize every word you are reading…all while connecting everything you read to everything you already know, at the same time? Sound fun?

Or how about seeming impatient much of the time, not because you’re impatient, but because you’re afraid you’ll forget what it was you wanted to do or say before the next shot of attention abundance hits you?

Now try to take this gift into an elementary school classroom where you are expected to focus on one thing at a time, ignoring all of the signals your brain is telling you to consider and connect it with everything else you see too. And this is what lies at the heart of this gift; a burning desire to connect everything you encounter or experience with everything else.

Early on, this gift does not make you the first one picked when baseball teams are being chosen at recess and it makes building personal relationships hard because you feel like an alien from another planet (and you’re convinced you are).

For a time, I thought life would be easier as a dolphin since all they do is swim and play all day and have no need to go to school, do long math, and sit still in a classroom for 7 hours per day. So, every night I would pray (as my Mom smiled and tried not to laugh too hard) that I would wake up as a dolphin. When that didn’t work out, I had to figure out another approach.

Luckily, I was exposed to yoga at young age and while I had many gaps in my practice, I kept coming back to it. And each time I came back, I found the answers I needed:

Yoga is the cessation of the fluctuations of the mind? Oh hell yes! Its one thing to have a “normal” brain but when the waves of yours feel like a Cat 4 Hurricane, learning how to cease, or at least calm, the fluctuations of your mind is exactly what you need.

Pratyahara (sensory withdrawal)? Oh yes, please let me turn this off for awhile so I can hear my own inner voice for once! Try walking through life with a brain wired like this and you’ll thirst for pratyahara like Kali did for the blood of demons! It’s also an important part of your own SPP (sanity protection program).

Asana (physical postures)? Gimme some of that—I need to exhaust this body so I can do the rest of the practice. Otherwise, its like giving an espresso to an adolescent baboon and asking him to do your taxes for you.

Pranayama (conscious connection to your vital life force)? The sweet nectar of the divine, better (and cheaper) than Ritalin, and with no side effects except making your neighbors think you take that Star Wars stuff too seriously.

Dharana (effortless concentration)? When you spend your waking hours with a monkey on your shoulder pointing at everything and saying “hey looky!” you learn that dharana is an all day, every day practice so that at some point, it does become effortless.

Dhyana (meditation)? I don’t know about you, but if you have ADD, you can’t get here unless you’ve done the rest of the practice. Oh wait, that’s the case for other people too!  Maybe Patanjali was also writing a guide for ADD and he just switched the book covers by accident. Either way, it works.

OK, I think you get the picture.  I love yoga and teach yoga because it not only makes me a happier person capable of giving (and receiving) unconditional love, but because it has enabled me to take what could have been a life burden and convert it into a gift.

Through my yoga practice, I faced the daunting challenge of learning to focus and in embracing and embodying Shiva energy, bring loving direction and order to the chaos of my senses and later, to any situation I encountered. In the process, it helped me to cultivate the gift of seeing the interconnectedness of all things in the universe in ways I could not have imagined. It’s the ultimate sadhana of discernment.

It allowed me to sit in many meetings with representatives from dozens of nations and help negotiate agreements easier because I could see the commonality in what they wanted…and show them how so often, they were actually in agreement—not disagreement.

It gave me the ability to feel the pulse of a room and know what everyone needed, whether it’s a room full of yoga students, or a dozen international organizations trying to figure out how to work together to alleviate the suffering of the people of Darfur.

It allowed me to have a career advising ambassadors, admirals, and other people with much responsibility who valued my counsel because I could always see how things were connected and show them a path to consensus.

Its enabled me to talk to nervous parents of children with ADD and help them see it as a gift, not a burden…to help them see what their child needs and how to support them.

I tell you all of this not to brag, but to give hope to someone who has been given this gift, not to mention to the parents of kids with ADD who may be reading this.

I’ve often been asked if I should develop a special Yoga For ADD program and while I have considered it, here is my simple answer: any good yoga practice involving all eight limbs of yoga, with a healthy dose of jappa and an extra helping of patience and good humor will do. It’s already Yoga For ADD, its Yoga!