So, You Want to Teach Yoga to Veterans? 6 Things You Need to Know First ~ Chris K. 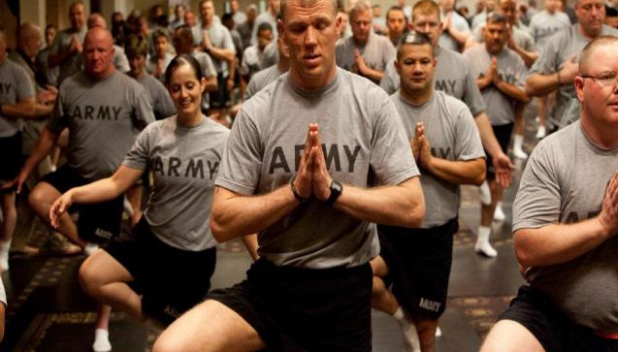 Fast forward to a few years later and I’m working as a full time yoga teacher and even opened my own studio.  Only now, I was hiding my military background since it too could lead to social and professional exclusion. I even recall one of the teachers at my studio who was railing on one day about how much she “hated” military people and asked me “don’t you just hate them too?” I was at a loss for words.

We don’t all have PTSD:
Its become very common these days for people to think of every veteran of Iraq and Afghanistan as having Post Traumatic Stress Disorder (PTSD).   This has perpetuated a social stigma on vets that has been hard to shake and made employers less likely to want to hire them which is part of why the unemployment rate for veterans is 10% – three full points above the national average.  According to a number of studies, the percentage of veterans  diagnosed or believed to have PTSD is somewhere between 14-20% – hardly all of us.

Don’t Pity Us And Please Don’t Lump us In With The Prison Population:
How would you feel if your service and sacrifice ended up with you being grouped in with convicted rapists and murderers? And this is not to say we should ignore those populations who include many wrongly convicted people who should not even be there, but its very insulting to veterans to be discussed in the same breath as prison populations when discussing how yoga can help certain groups.

Don’t Patronize Us:
We all know you mean well but please don’t look down your nose at us from your spiritual pedestal. So when you speak to us, please do it without a tone that says you’re talking to a bunch of poor misguided souls who were dumb enough to join in the first place.

You can’t be a warrior unless you love deeply. We love those around us and feel so strongly about it that we’ll risk life and limb to protect them. That is why we joined and why we serve. We don’t fight for a flag – we do it for each other, for our families, for our friends, and for complete strangers we’ve never met.

Please Don’t Ask Us How Many People/Babies We’ve Killed:
If the veteran you’re speaking to has had to take another life, its not something they would ever choose to do on their own and its something they don’t feel great about. So, its completely inappropriate to ask.

Let Us Help Heal Ourselves:
One thing that is disheartening is how seldom veterans are actually encouraged or allowed to help their fellow vets. Some think so little of us that they won’t let us teach each other.    Look at the board of just about any yoga for veterans organization and you won’t find a single veteran there but you’ll find plenty of famous yoga teachers. Warriors at Ease, a veteran run organization, is one shining exception.

And why is it when someone finds out you are a vet and a yoga teacher, they want to keep you away from helping them work with vets? Do they think we’re all too damaged to help?  I’ve encountered this several times and more than a few of my fellow vets and yoga teachers have too. In one case, a yoga teacher and vet friend in California was aggressively rebuked and turned away by a colleague simply because she asked to come along to take part in a meditation group at a local VA facility.

How You Can Help:
First off, thank you so much for wanting to help veterans through teaching yoga. It means a lot to all of us that you’ve chosen to work with us when you could be off doing something much more glamorous.

Soldier’s Heart:  One of the original veteran’s mind-body-spirit support organizations founded by Dr. Edward Tick, author of the award-winning book War And The Soul (highly recommended for anyone working with vets and his next book,The Warrior’s Return,  will be published in 2014. Their goal is to prepare families and communities in supporting and healing veterans – both those returning from current wars and those who fought in past wars. Our veterans’ project focuses on creating a network of community based services to facilitate a healthier and more successful reintegration of our nation’s veterans.