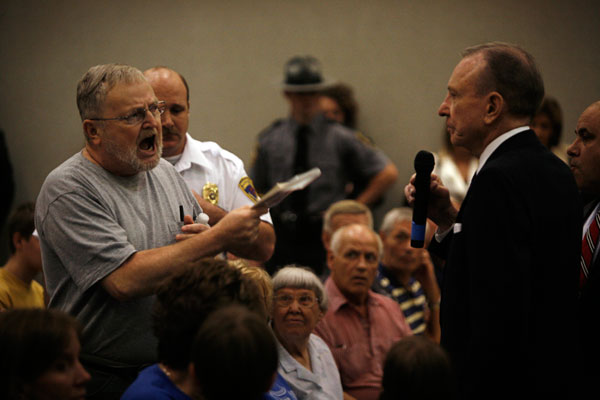 When yoga teacher Holly Troy was driving with a friend to a class in Flagstaff, Arizona last year another driver surged into her lane and cut her off in traffic. She started to yell at the other driver but caught herself, and turned to her friend remarking,

This week I found myself in a spat with someone who was being unkind to a colleague and found myself getting increasingly angry, like some hidden serpent was uncoiling inside of me. What happened to that calm, centered guy who emerged from savasana (corpse pose) just the night before?

After a fulfilling yoga experience, someone can even run into our car and it wouldn’t bother us much at all. The puzzling thing is, how can we all hang onto this blissful, compassionate outlook and actually live our yoga all day long?

These questions have been boiling my innards recently, especially after discussions with people who think we should not reform a system that leaves 46 million Americans without health care or think its OK for the government to torture people – not to mention the inconsiderate behavior we all experience every day. How can we practice peace and compassion when faced with what we see as selfishness, ignorance, and hatred?  Isn’t this among a yogi’s greatest challenges?

Let’s take the example of Holly and the driver who cut her off. What was that driver’s intention?  Did he mean to be inconsiderate (and dangerous) or was he frantic and running late for an important appointment, impairing his judgment. Had he just found out he was about to lose his job and wasn’t really focused on driving?

While not making excuses for the other person’s behavior, by not assuming they have malicious intent and trying to understand them, we free ourselves to respond compassionately. It is also perhaps important to remember that, being human, we all have those moments when we have not been fully present and have unknowingly done the same inconsiderate things.

And what exactly was it Holly was about to communicate when that driver cut her off?   According to practitioners of nonviolent communication, the intent of her frustrated visceral reaction would have been to tell the other driver that he had endangered her and her passenger.  But the way it would have been communicated may have been expressed as anger and frustration, something that that driver may have taken passed along to someone else later in the day.  What we’re feeling and what we express are often two different things.

So, maybe it sounds easy to respond peacefully and compassionately with every day annoyances (although, sometimes it’s not), but how do we do so in the face of a “Tea Party” person screaming angrily at a town hall meeting and claiming health care reform will endanger his well being and lead to someone deciding to euthanize his grandmother? Does he not care about the millions of people with no health care? Is he so ill-informed that he really believes someone wants to kill his grandmother? How do we not see such a person as ignorant, selfish and unworthy of our compassion?

What that screaming man means to say is that he is scared. Maybe he thinks that health care is a zero sum game in which whatever you give to someone else must be taken from him (and his family). He would probably like to help those people without insurance but since he thinks it is a choice between his family and yours, he chooses his own. It also means that he probably loves his grandmother very much. It doesn’t matter that his fear was likely fomented by people with a financial interest in the status quo, what’s important is that his fear is very real to him.

So instead of seeing a selfish, uncaring person in front of you, try to see the person living in fear that the people they love will lose out or be endangered. Responding to that person is quite different from reacting to what you hear them saying.  And isn’t starting from a basis of caring about those we love common ground for a constructive discussion?

And what about that person who thinks it’s a good idea for the government to torture people?  Surely someone who supports such a ghastly practice is full of hatred and bitterness – why do they deserve compassion?

If you’re like me, you’ve had dozens of discussions and arguments with torture supporters but I have yet to meet one who is a sadist. The arguments they usually put forward are that its necessary for the government to use torture to catch terrorists so their loved ones will be protected from acts of violence.  If there were any other way, they’d be against it but they don’t want people to suffer because we didn’t do all we could to prevent it.

Of course that same person will ask you the hypothetical question of,

“what if you had someone in custody who knew exactly when and where a bomb would go off that would kill your family, would you torture them?”

To which I like to ask how they are so sure that one person has that information, but I digress. Never mind that torture is illegal, immoral, doesn’t work and creates even more terrorists.   Either from listening to Dick Cheney or watching Jack Bauer do it on the TV series “24” (the source of many torture supporters hypothetical arguments), this person thinks its got to be done or their family isn’t safe.

I know it is difficult but instead of seeing someone who likes the thought of someone being tortured, you’re probably talking to someone who is deeply conflicted to be compromising their values in such a way (since they probably know its wrong but see the safety of their loved ones in jeopardy). Again, even though they are using a “destroy the village in order to save it” logic, the idea that its probably somewhere based on love for their family could also be a basis to have a real discussion instead of a shouting match.

So, whether it’s a conspiracy theorist, the person who forgot to turn off their cell phone before yoga class (which starts ringing behind you while you’re in tree pose), or that lady who ran her cart into my foot in the produce section today, we always have a chance to practice compassion.  By acknowledging what is happening, looking at the situation through the lens of compassion, and responding (not reacting) peacefully, we can truly live our yoga – regardless of the situation.