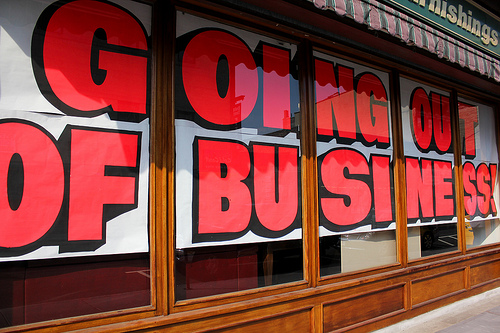 It happens slowly, and begins long before students stop coming to class. Yoga studios die for the same reason that love dies: laziness, disrespect, and neglect. Simply put, they die because teachers and studio owners take their students for granted.

It begins with classes becoming stale. Teachers fall into ruts and begin to repeat themselves with the same sequences, the same poses, even the same jokes and playlists. This happens when teachers become bored in their own personal practice, or when they have no personal practice anymore.

It begins when merchandise becomes more important than the classes, when the latest brand of leggings or cleanse becomes the focus of the studio. Where students that don’t participate in the group fads or fasts are excluded.

It begins when studio owners and teachers create an inner sanctum for their close friends. Where private jokes are mentioned in class. Where new students, or regular students that aren’t accepted by the clique, are ignored when they enter, and have to vie for attention to simply sign in and pay.

It begins when students show up for class, and the teacher doesn’t.

It begins when the studio is all about one teacher (usually the owner) and not a team of teachers. Every image of the studio and every workshop is about this person.  It happens when a studio does not realize that people support what they help create.

That is why students stop coming in. The loyal ones will hang on for awhile but even they find their breaking point and leave for good.  Unfortunately, most studios turn to gimmicks instead of fixing the problems that chased away their loyal student base. This is not unique to one city, or country – it is global.

The response is almost always the same, in the same order. These behaviors don’t save the studio, they only speed its demise and harm the entire yoga community in the town.

The  first step is to start a Groupon or an impossibly cheap offer for new students (i.e. to poach students from other studios).  Such an approach places the blame for the studio’s failure on the competition, not on its own neglect of loyal students.

Loyal students who have been paying full price feel cheated when the person on the mat next to them is paying only $1 per class, and then they too leave, chasing a deal at another studio. This domino effect (really a race to the bottom) affects all studios in the area, and students go from class to class looking for a better deal, thinking all yoga classes should cost next to nothing.

As fewer students show up to classes and stop buying class passes, the failing studio finds itself struggling to pay teachers and to pay the rent.

And then, the teacher trainings start…

Now, not all teacher trainings are created equal. There are studios and teachers conducting trainings to serve their students, to help raise the bar of teaching standards, and to help create the next generation of highly skilled professionals. These teachers know that it takes approximately 3 hours or preparation for every hour of teacher training they teach. These programs have high standards, and only accept established practitioners.

Then, there are the studios and teachers that do it for the money. There is no preparation. The only standard they have is that the student’s check clears. These dying studios become no better than puppy mills, spitting out poorly trained teachers who have barely been practicing a year, and it shows.

They create their own competition. If the studio that trained those teachers doesn’t hire them, they will inevitably open another (often struggling) studio. If they are hired, the quality of classes will continue to decline.  Regardless, the revenue from these teacher trainings will not hold off the inevitable…

After all the students have been turned into teachers, the studio gives its last breath and finally succumbs, only to be renovated and turned into a frozen yogurt shop.

The effect of this phenomenon is felt throughout the entire yoga community. Students begin thinking poorly trained teachers are the norm and that classes are worth less than a latte at the corner coffee shop.  They also begin to see yoga as a cliquey activity ruled by young women in stretch pants who can do impossible poses and sneer at those who can’t.  It’s Mean Girls meets Cirque du Soleiel…but with far less integrity.  And the people who are normally most in need of yoga become alienated from it and look for something else.

This is what happens when yoga studios eat their own seed corn.  But it doesn’t need to be this way.

The solution is simple:

Respect The Students.
Give them a good class, and if they don’t like your class send them to another teacher that can give them what they want. Reward loyal students and don’t try to get new students at the expense of those that have been with the studio for years.

Support Other Teachers
There are enough students to go around so support other studios, take other teachers classes, and know who is part of the larger community. And, Studio Owners – have your teachers’ back, don’t allow toxic students to bully them.

Ditch The Clique
Exclusivity breeds jerks. Jerks are by nature full of crap and they only make the entire community stink. Have your friends, but be open and welcoming to new people.

What the yoga community needs is accountability. This means taking responsibility for our own failures, and looking at our own faults rather than focusing on others. Criticizing and attacking other teachers and committing underhanded and cut throat business practices, isn’t yogic.  It is petty and juvenile, and doesn’t solve any of the problems a yoga studio or community face.

We need to preserve the practice and raise the bar. We need to collaborate, not compete. We need to bring more people to the practice by displaying the attributes of a true yoga practitioner: compassion, dispassion, equanimity, and accountability. If we lived the practice it would only attract more practitioners, and this means that no studio would ever fail.

« 7 Signs Your Friend May Be Jealous & What You Can Do About It ~ Chris Kiran Aarya
Amrita and Ambrosia: The nectar of Immortality ~ Evi Bouzaki »