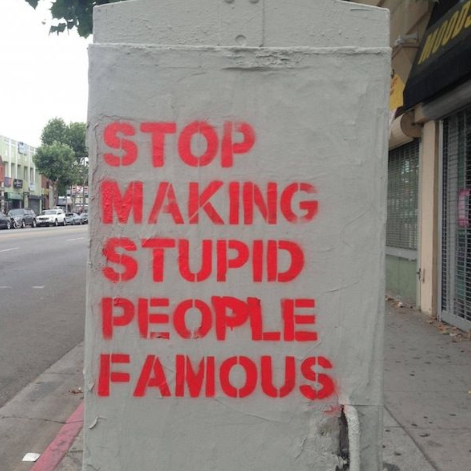 When did teaching 300 people yoga from atop a stage, never moving among students but remaining separate and above them, become normal?

When did performing asana demonstrations with light shows and live music in front of drunken crowds, and writing contrived platitudes deem someone an accomplished yogi?

When did teaching yoga become a performance instead of instruction, relying on costumes, playlists, and stand-up routines?

When did the teacher become bigger than the teachings?

In an age when the word guru has become a dirty word, celebrity teacher worship has taken its place. It is hard to see a difference between the mindless following of a guru and a celebrity.

Rather than influencing the world around us to see the divine in all things, to be more compassionate, to love one another, the yoga ‘scene’ has allowed itself to be corrupted by the very worst popular culture has to offer. And celebrity is the very worst.

It is a sign that we have reached the zenith of our societal hierarchy. To be famous means to have an army of adoring fans. Fame is the love of the masses. They admire and fawn; they never neglect. Fame grants instant success.

When you’re famous you are always being watched, you are never really alone. Strangers idolize and respect the famous. They will follow celebrities’ lives in magazines and online. Even in death, the celebrity lives on, revered as an icon of the golden days of yore. They are remembered, even if their sins are not.

Fame immortalizes the ego. And the desire for fame is nothing more that a subtle form of abhiniveśāḥ, the obstacle to our practice that manifests as a fear of death.

Fame is a manifestation of the fear of the death of the ego.

Fame is an addiction to our ego.

Our ego is nothing more than an idea of who we are, that we then project into and onto the world around us. People fall in love with the idea, not with the person. Perhaps that is what makes fame so completely un-nourishing, what turns this into an addiction. No success of the ego is ever enough. Imagine going through life trying to outdo your last achievement, trying to recreate past successes, always focused on the past, or at least trying to relive it.

Adulation, attention, and love is the fuel that feeds the ego. Fame is the syringe that most effectively delivers the dose. But like a fire, the ego only grows bigger and hungrier the more it is fed, requiring more fuel to sustain it. However this ego fire creates no heat to warm the soul, no campfire for a community to gather around. It creates a spotlight that is pointed on everything that keeps us feeling separate, from others and from our true Selves.

Our culture encourages consumption as reward, and self-reflection as punishment. And Yoga is all about self-reflection. The root for the word Yoga can be interpreted as “to yoke”, “to join”, “to concentrate”, “to contemplate.” The goal of yoga is to join with the divine through concentration and contemplation. This is the heart and soul of the practice.

Why pursue fame when we can pursue our true nature, which is divine? Why chase after shallow and temporary pleasures? As yogis, should we not actually practice yoga and pursue the ultimate source of divine, eternal, unchanging reality?

And why do so many support the celebrity yoga teachers? When they can be described, at best, as fitness instructors, and, at worst, fitness models? Proximity to fame brings no more joy than it does to the celebrity. And no closer to enlightenment. But, for many, basking in the reflected glory of the idealized personality is easier than looking beyond the petty needs of their own ego, and doing the work that is required for a yoga practice

Yet, to so many the idea of fame is alluring. It is seductive, and many a yogi has fallen from grace in their pursuit of this goal. Who has the integrity to withstand the temptation to abuse the power that comes along with fame?

The concept of a celebrity yogi is simply not sustainable without the benefit of enlightenment. And in yoga, enlightenment means the complete obliteration of the ego, so that the true Self can merge back to the divine source.

As Chris Hedges describes in his book Empire of Illusion:

“The highest achievements in a celebrity culture are wealth, sexual conquest and fame. It does not matter how these are obtained. These values… are illusory. They are hallow. They leave us chasing vapors. They urge us toward of life of narcissistic self-absorption. They tell us that existence is to be centered on the desires of the self rather than the common good. The ability to manipulate others, the very ethic of capitalism, is held up as the highest good.”

Worldly success means money and power. Spiritual success means bliss. There is no need for sex, cars, status, and titles when one knows the Self. How many of us have gotten what we always wanted, only to realize it was not a source of everlasting peace and joy?

I recall one of my teachers, a man so devoted to the practice he has no money, living his life in service to others, bankrupting himself to care for the elderly and ill. At this time his health has completely failed, he has no significant other, nor children. He has no recognition from the world, other than from his few students. But he has his faith. So much so that he faces his end joyously.

By worldly standards, he has failed. By spiritual standards he is a complete success.

Do I want to be famous? I admit that I dream of leading retreats in exotic locales and of being invited to teach at conferences. More often, I dream of an end to the actual struggle that faces the full-time yoga teacher, simple things like being paid well for classes, days off, health insurance…

But do I want fame? My privacy violated, strangers demanding my time and attention, and the expectation to perform so that others might be entertained? Do I want the constant stream of ass-kissers telling me I am wonderful, satisfying my every desire, feeding my ego so that I believe the bullshit image that was created to sell me as a spiritual commodity? Hell No!

As for my teacher, he has surpassed the need for the love of others. He has attained a connection to the divine. After all, that is the goal of yoga.