Amrita and Ambrosia: The nectar of Immortality ~ Evi Bouzaki

I get very inspired from myths even though I sometimes forget the story. The myths that unfold in Greek and Indian texts are intriguing and can stimulate a certain philosophical idea that gets stuck in my head.  In this case, its Amrita, the nectar, the fluid, the flow of immortality and Ambrosia, the nectar of gods. Both have a few similar connotations.

In Hindu philosophy, Bindu Visagra, is the psychic center at the top of the head towards the back but same plane where the 3rd eye is located. Bindu means ‘point’ and ‘dot’ and refers to the point where each individual contains the potential consiousness and creative force. It is said to be the place where the moon resides and when it is full, it sheds its nectar or ambrosial fluid down to permeate the entire body, just as the external moon pours its light over the surface of the earth at the time of the full moon.

The flow of nectar produced by the bindu make the body resistant to toxins in the system and the immune system strengthens towards all viruses. In physiological terms, this flow of nectar is associated with the release of hormones from the pituitary gland into the bloodstream.!  In Sirsasana and Sarvangasana, Amrita is increased, bestowing health and longevity. According to the Hatha Yoga Pradipika (HYP), if one practices Kechari mudra the process of degeneration of the body can be reversed.  “Khechari mudra is turning the tongue backwards into the cavity of the cranium and turning the eyes inwards towards the eyebrow center” (see HYP ch3 sloka 32).

Apparently, to practice Khechari mudra  is not an easy task..It is a cleansing technique that can change the structure of the tongue; the tongue becomes flexible and can be inserted into the upper epiglottis. This is when the nectar of immortality begins to flow.

It flows from Bindu Visagra (see above) to Vishuddhi Cakra (throat) where it becomes purified and processed for further use and distribution to the whole body. To gain immortality though one needs to perform techniques and practices so that the nectar  is trapped and consumed within the human body.   However, also bear in mind that one of the alternative definitions of Jalandhara Bandha (throat lock – where ‘jal’ means ‘water’) is to hold the nectar in vishuddhi and prevent it from falling into the digestive fire. In this way, prana is conserved.

When concentrating on this center; we can visualise a large white drop of nectar. Try to experience icy cold drops of sweet nectar falling down to Vishuddhi from Bindu, giving a feeling of blissful intoxication.  I love these symbolic metaphors that follow a myth, since myths are part of our culture and they have philosophical, psychological but also physiological connotations.

Here is the story and symbology of vishuddhi chakra and the nectar that is presented in HYP. ”When the devas (good supernatural deities) and asuras (the supenatural forces of chaos that are in constant battle with the devas) were churning the ocean they extracted fourteen elements, two of which were nectar and deadly poison.

Neither of the two parties wanted the poison, but both wanted the nectar. When it came to the distribution of the nectar the devas and asuras sat in two lines. Lord Vishnu disguised himself as a beautiful young maiden and danced between the two lines, discreetly pouring the nectar only into the glasses of the devas. One asura sat in the deva’s line and also received the nectar. However,as he swallowed and it reached his throat, the sun and moon, who had been watching the whole situation, told Vishnu, who then destroyed the asura before the nectar had time to circulate through the body and endow him with immortality.

Now when the poison was extracted everyone was afraid. Whoever drank the poison would be finished, and yet there was no safe place to discard it either. If it was thrown away the three worlds would be burnt. So they took the poison to Lord Shiva to ask for his help because he was the only one able to drink it without being destroyed. Shiva drank the poison and retained it in his throat. He managed to purify the poison and liberated the world from a deadly danger.  Therefore, he is often depicted with a blue throat and called ‘Nilakanta’. This myth signifies the capacity of the yogi who has awakened Vishuddhi cakra to assimilate both positive and negative aspects of life; to retain balance, health and equanimity in the midst of the dualities of pain and pleasure, light and dark, life and death, body and mind etc (see HYP page 326).

Thinking about the nadis (energy channels) and since Amrita has to do a lot with the energetic body, I found a very nice concept of the ‘conduit of immortality’ Amrita-nadi spoken of by Ramana Maharsi in South India. Amrita-nadi manifests upon full enlightment and it creates a link between the ascending sushumna-nadi and the centre of the heart. It can be used as a visualisation perfectly…It is as if a line of Light were plumbed between the deep center of the upper coil (midbrain to crown) and the deep centre of the lower coil (below and behind the navel). The whole body becomes full of Light and Radiant Bliss. This entire fullness is the reflection of the Heart.  All of it is Amrita-Nadi.

In Greek Mythology, Am

brosia was the nectar of Gods, their food, sometimes their drink,  confering immortality upon whoever consumed it …a (‘not’) + vrotos (‘mortal’).  According to the Homeric tradition it was brought to the Gods on Mount Olympus  by doves, and may have been thought of in the tradition as the divine exhalation of the Earth.   It is often related with nectar or the ‘elixir of life’.  Although ancient Hellenes considered their gods as powerful, blessed, immortal anyway, ambrosia and nectar added something magical to the myths and their ‘existence’ was spiced up a bit!

In Homer’s poems, the Goddess Athena drizzled ambrosia all over Penelope in her sleep, so that when she appeared before her suitors, the effects of her age on her skin were magically erased and they were inflamed with passion at the sight of her.

Ambrosia is often associated with a sweet, fermented, potent drink which nowdays scholars associate it with honey. This is how the Honey Bee, the provider of the nectar, is nature’s perfect symbol of balance, mystery and perseverance. Honey can have healing and cleansing properties and can also be used to make wine which is the modern fluid related to ambrosia or the ‘rosy-red nectar.” 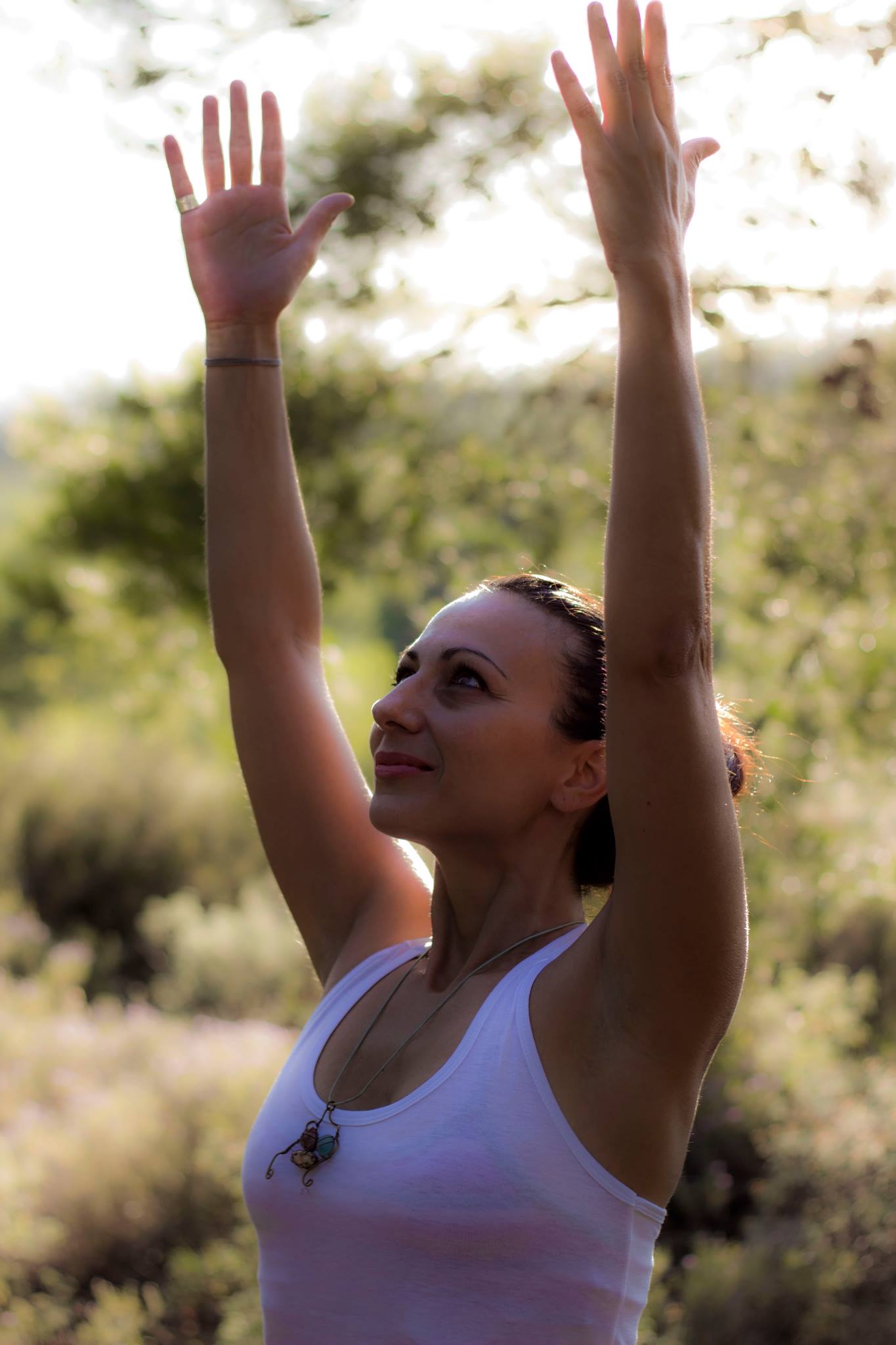 Originally from Greece, Evi became involved into yoga out of her interest in physical movement, while practicing other disciplines in martial arts. She moved to the UK in 2004 and came back to Greece/Athens in 2012, where she currently lives and teaches yoga. Very soon in life she became a dedicated yoga practitioner and noticed the benefits of the yoga practice, which soon became a routine, a support, an anchor, something she could go back to whenever out of balance.

Whether to achieve clarity and health in everyday life with a strong body and mind, to feel a sense of peacefulness and wellness or to find enlightenment and God realization, Evi sees yoga as a way to help us listen inwards to our deeper needs in order to experience the truth of who you really are. Conscious dynamism of movement within and between poses where one could bring mindfulness into his/her actions through the breath, is what Evi aims to achieve through her classes. Hence the name ‘YogaKinisis’ where kinisis=movement in Greek. Yoga classes with Evi embrace flow, harmonizing movement and breath where the intensity of the movement is always to be decided on the group level or individual.

The time was right in 2006 for Evi to attend the British Wheel of Yoga Teaching Diploma course (2006-2009) with Dave Charlton. Slowly discovering and experiencing the different traditions, fascinated by the yoga philosophy, the beauty and mechanics of human body, her interest then led her to the completion of the ‘Art of Individual Teaching’ 500hrs course (2009-2011) through aYs and BWY with Dave Charlton and Ranju Roy. She always had proper guidance from her excellent teachers under the tradition of Viniyoga (=appropriate application) as well as extensive influence from other traditions, always attending workshops, leading retreats, always love to learn, experience and keep herself inspired.