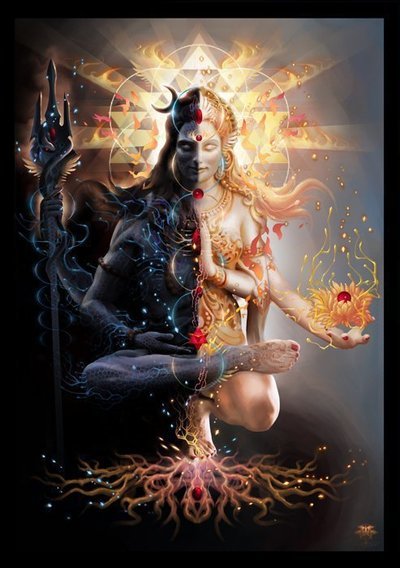 And by feminist, I really mean humanist.

The first yoga teacher was Shiva. The first student was Parvati. It was a lowly fish that overheard the teaching and carried it to humanity.

This represents the masculine and feminine as it is presented in our practice. Shiva, the masculine energy gives; Parvati, the feminine energy, receives. And the lowly fish reflects the desire to grow from a simple consciousness to an expansive and cosmic consciousness. These aspects exist within us. As teachers we are always sharing, as students we are learning, as humans we are evolving.

In yoga, we seek to integrate these parts, to become whole, and find our way back to our true Selves. When our energy is balanced we can become something bigger and better, something divine. If we only cultivate our masculine energies and neglect our feminine, or vice-versa, we will never find the goal of our practice. If we cannot echo that in our immediate society, we will never achieve our goal.

The ultimate manifestation of divinity is without form, and ultimately, without gender. The fact remains: The atman (the essential self) has no gender. We are not our bodies, we are not our minds, we are divine. This is not a God or Goddess delineation, this is transcendent of corporeal manifestation. This is the ultimate reality of which there is only one.

The Laws of Manu, an Indian text that lays out early legal code, states “The Gods reside where women are honored, where they are dishonored, all is in vain.” This is a beautiful sentiment. And yet, the remaining text is full of misogynistic laws. Here is one of many examples: “If a woman should happen to merely overhear recitations of Vedic mantras by chance, hot molten glass should be poured into her ears.”

In truth there is a long history of misogyny across the world; this includes both East and West. We expect more from yoga and spirituality, but are so often disappointed. In the modern history of yoga we saw Indra Devi’s requests to become a disciple rejected by Krishnamacharya because she was a woman. It was only after the Maharaja of Mysore spoke to Krishnamacharya on her behalf that she was accepted as a student. And today in many Indian ashrams women are still required to wear long pants and long sleeve shirts to practice, while men are free to practice in whatever they like.

My personal experiences with the inherent schism of spirituality and sexism came as both a student and as a teacher. I have had phenomenal teachers, but some refused to teach me certain asanas, claiming “That is not appropriate for women.” They claimed dangers to reproductive organs in simple poses that had, to all appearances, nothing to do with reproductive organs.

I have also worked for male studio owners that sexually harassed me and other women in their employ. This isn’t all that rare. But, if yoga is about transformation of the lower self into the divine Self, why does this attitude of chauvinism and misogyny exist? Why have I heard so many similar stories from other female practitioners?

At the same time, some men are often discriminated against in the yoga studio scene. I have heard from men how simply walking into a yoga studio they were treated like intruders. Is it any wonder that men avoid yoga when they receive unwelcoming looks from fellow students and are handed blocks with condescending comments like “you’ll need this because you’re a man”? Just because women are mistreated in broader society does not make this right—feminism does not mean adopting the worst characteristics of men.

Yes, misandry exists in yoga as well. We talk about embodying our inner Goddess with Full Moon practices honoring our monthly cycles, but can you imagine a men-only class to better embody the Mars Warrior within, celebrating nocturnal emissions and the production of spermatozoa?

Still, we focus so often on the plight of women because we see the deplorable treatment of women accepted all over the world. And this is not hyperbole; according to the 2011-2012 Annual Report from UN Women “603 million women still live in countries where domestic violence is not a crime, and 2.6 billion have no criminal legal protection from marital rape.”

Let that one sink in.

A population equal to twice that of the United States lives in countries where domestic violence is not a crime…and 86% of women live in places where marital rape is not against the law.

If half the human population is not granted human rights, how does that affect the whole? According to both UN Women and the World Bank, countries were women have the same rights as men also enjoy greater financial and social prosperity. When everyone in a society is granted liberty, rights, access to education, and are welcome to participate in politics and institutions; when everyone in a society is duly represented, we all benefit.

But no matter how long women fight for equality, until men get more involved in gender equality, we won’t see real change. We must not neglect the role of men in our pursuit of equality as women. It is becoming very clear that women’s rights are tied to men’s rights- because these are human rights. As Tony Porter said “My liberation as a man is tied to your liberation as a woman.”

And yes, men are ready for this change too. Studies I read and conversations I have with men all point to a longing to move away from the norms that society has placed on the masculine: to not have feelings or feel pain, to always need to dominate, and the need to always seek sex. And mostly, they desire to be free of the fear of rejection and alienation by their fathers, brothers, and friends (and even some women) for rejecting these norms and seeking a more conscious path.

This prison of gender stereotypes has no place in our practice. As yogis we should seek to rise above these prejudices. We need to understand the basic principles of yoga philosophy. The goal of yoga is to evolve, to become better people, transform our souls, and create a better world. This is through cultivating the flow of energies within us. This exclusivity along gender lines means that we leave others out, and turn many away from the practice.

Clinging to our physiology only strengthens our identification as man or woman. This leads to the Klesha of Raaga—the obstruction of attachment. In order to recognize our Higher Self we must discard the notion of the self as a body. But beyond our lofty goals as yogis, this clinging to our own gender as women also helps perpetuate the clinging of men to their own gender. This only promotes all gender stereotypes.

We are spiritual beings having a human existence. Krishna taught in the Bhagavad Gita: “As the body sheds worn-out clothes, so the soul sheds worn-out bodies. And as we put on new clothes, the soul dons new bodies, as if they were its raiment.” It is believed that our gender changes from life to life. This is to insure that our souls have the full spectrum of human experience. Sometimes we are here as men, and other times as women. If we fail to respect each experience, we remain bound to samsara and doom humanity to remain on the wheel of suffering.

Embodying Shiva and Shakti, ida and pinghala, masculine and feminine, we integrate and become more than just the sum of these parts. Yoga is about our evolution as humans. We seek to become better and to make the world a better place. And coming back to feminism, and humanism, it is about remembering that no one is equal if we are not all equal. No one is free unless we are all free.

We are manifestations of the one true reality, which is divine.

So when we use the word namaste and explain it to our students as recognizing and honoring the divine within each other, let’s start meaning it.