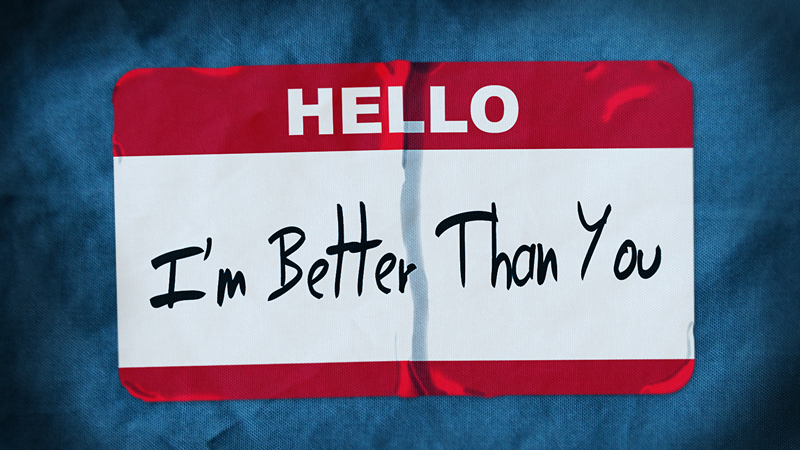 I have been a vegetarian for about 12 years. In that time I have spent years being vegan, raw vegan, ovo-lacto vegetarian, and all points in between.

I find that some folks think that being vegetarian or vegan makes them superior to others, more spiritual, more moral, more good. I also find this to be misguided.

People choose to not eat meat and/or animal products for many reasons. Some for taste, others out of compassion, and some out of a concern for the environment. Every reason is valid.

But thinking you are better than anyone else for any reason is not moral or spiritual. It just makes you an asshole.

Ahimsa, the moral principle of non-violence in Indian philosophy, is at the heart of yoga as a practice, and many teachers advocate a meat-free diet. Swami Bua, one of my own beloved teachers and gurus would say “Eating meat makes your body a cemetery and your house a morgue!” But in my conversations with him, he showed tremendous compassion for those that ate meat and were raised in meat-eating homes, including me.

He asked me in one of our many conversations if I was vegetarian, and I answered ‘yes’. He then asked me if I was raised vegetarian and I answered ‘no’.  He became very quiet and looked down. His eyes filled with tears, and his head shook. And after several minutes he spoke:

“It is too bad that you were raised like this. It must have been very hard to change.”

He was right. It was.

I was raised in a home with immigrant parents that recalled a time when food was scarce in their native land, and as a child I heard stories of people starving to death. I was raised to know how to butcher a lamb (or goat or rabbit) and cook it – sparing no parts or organs. My food had a face, and we would eat that, too.

But we also ate greens, vegetables, fruits, and whole grains. We would adhere to our lenten fast which lasted for almost 50 days in the spring and was a strict vegan diet. I learned how to eat and taste my food, and I could cook by the time I was 12.

As an adult I was shocked and outraged to realize that people that ate meat often refused to acknowledge that it actually came from animals. I believed then that unless someone is willing to kill, bleed, and butcher an animal themselves, they shouldn’t eat meat.

And then I started practicing yoga. And I slowly began to change…

At first I resisted. Let’s face it, eating is both personal and necessary. We do actually eat in order to live, and the cultures we are raised in dictate what we eat. Even how we eat is embraced within our cultural norms. Prayers are spoken over food, table manners are unique across different countries and cultures, the act of feeding oneself is a developmental milestone. Meals are shared between families and friends to celebrate holidays and special events, and also to make the time to simply sit together and talk about their day. Our relationships with others are created and maintained around food. And often our relationship to food is an indicator of our quality of life.

You can’t just tell people to change everything they have ever known, especially when it is wrapped in sanctimony and superiority.

No one appreciates proselytizing. No one wants to be forcibly converted.

As I changed (and it took a few years) I realized that I didn’t need to eat meat. While my parents saw the devastation of malnutrition and starvation, I never did. And I decided, at my own pace, that I would no longer eat animals.

It probably would have taken less time if so many people around me weren’t trying to bully me into adopting their life choices using videos from slaughter houses and misogynistic images from PETA.

I would have made the change far earlier if I had actually seen the compassion my peers were talking about. Instead all I saw was cruelty to other humans, and a demand for conformity.

It’s really not ok for someone to rant about animal rights then turn around and treat their fellow humans like trash. It’s not ok for vegetarians to act superior to meat eaters any more than it is ok for a vegan to act superior to a vegetarian. All of these behaviors violate ahimsa. No one will ever evolve or grow if there is a deep-seated hate for different ideas, lifestyles, or levels of personal growth.

I think it is important to recognize that everyone is on their own path, and that when the time is right, people will realize on their own what is the right way for them to live. You cannot force anyone to your way of thinking.

If your compassion does not extend to meat eaters, then you have failed to practice true compassion.